I’m thrilled to have Lindsay here today, from Leesh and Lu’s Recipe Box, while I’m getting some snuggle time in with my new baby, to share her amazing Blueberries ‘n Cream Mile-High Pie!  Lindsay (Lu) happens to be a good friend of mine, so I’ve had the pleasure of partaking of the fruits of her labors in the kitchen, and I can say first-hand that she’s got serious talent.  🙂 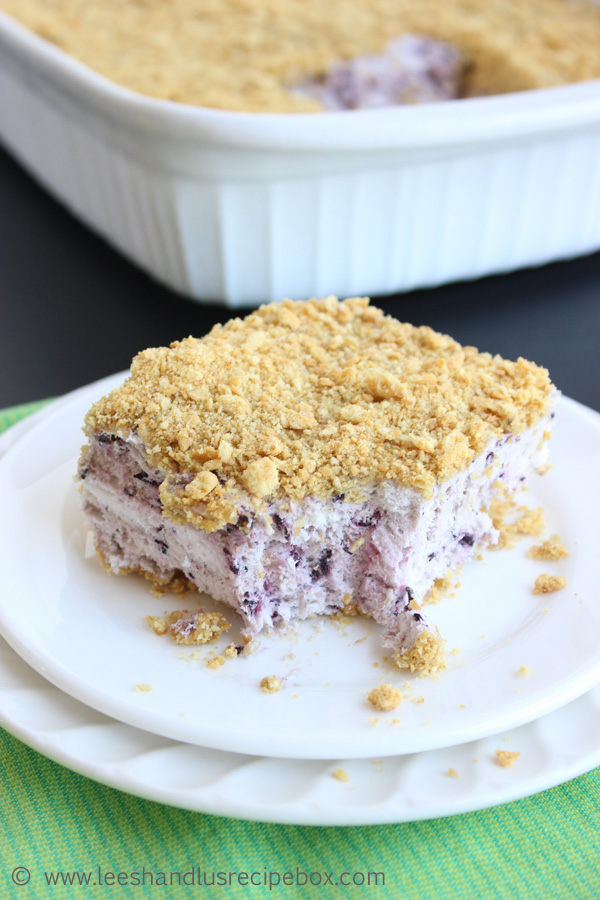 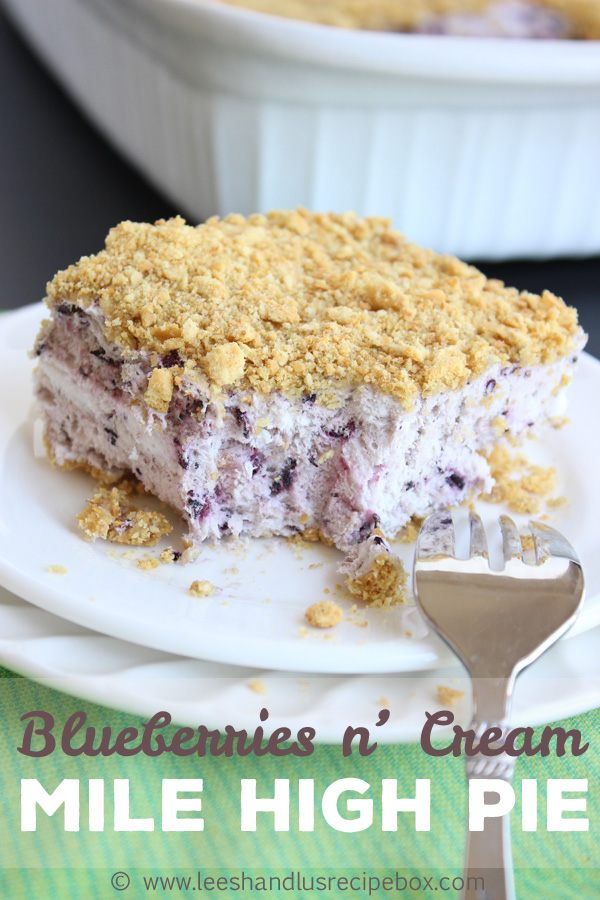 This recipe comes from my husbands family.  It’s been made in their family for several generations with strawberries.  And while we looooove love love the strawberry version, I’ve been on a major blueberry kick lately!  Now we have two favorite versions of this pie, and I already have my brain rolling to whip out a few other flavors too.
Let’s get a little personal with this piece of pie! Take a close look. 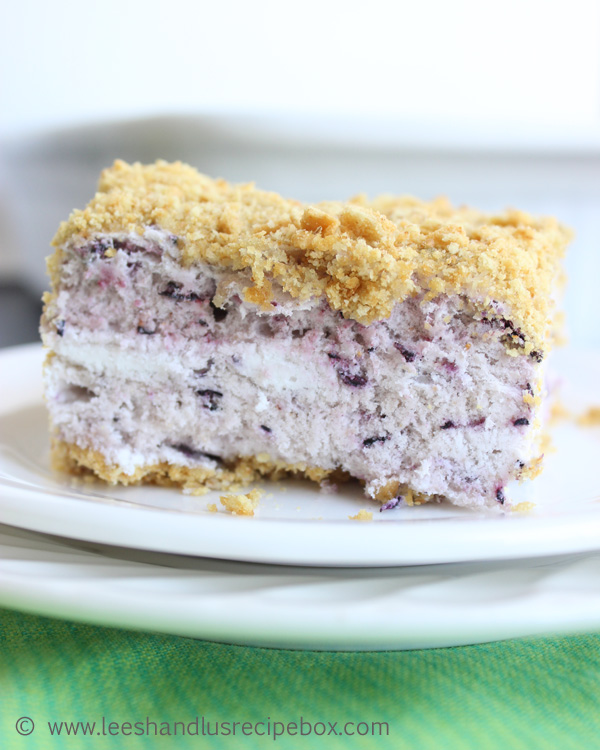 Meet Blueberry N’ Cream Mile-High Pie!  Isn’t she a beauty!  This dessert is unlike any other dessert I’ve ever had. It’s so light and fluffy you probably could pile it a whole mile high, hence it’s name. The mixture is a whipped frozen berry, egg white and sugar mixture, you wouldn’t believe how much volume a few blueberries and 2 egg white and some sugar can get as you whip it for 5 minutes.  It blows me away every time.  Then whipped cream gets gently folded into the mixture, leaving you with delicious swirls of creamy goodness. Oh man!  I’m going to need to whip up another batch just talking about this.
It’s so light in texture I feel like I could probably eat nearly the whole pan.  But we usually eat it ever so slowly and enjoy a piece every night until it’s gone.  Below are some step by step pictures of how to whip this up. It’s easy as pie!

Starting in the top left and going left to right.

1. Add egg whites, lemon juice and sugar to your stand mixer with the whip attachments.
2. Pull some frozen blueberries from the freezer and let them thaw for a few minutes until this are still frozen, but thawed just enough to crush under the pressure of your fingers. Don’t let them go past that or they won’t whip up nice.
3. Turn your mixer on high and whip for 5-10 minutes until it’s stiff, full and fat. It takes up practically the whole bowl on my mixer when it’s done.
4. Here it is nice and full. Scrape it gently into a large mixing bowl.
5. In the mixer or with a hand mixer whip a cup of cream until it’s stiff.
6. Place the whipped cream into the mixing bowl with the blueberry mixture and gently fold it together – I like to make sure it’s not over mixed, you want to save the fluff from being flattened. I like swirls of cream in mine.
7. Place 3/4 – 1 cup of graham cracker cups in the bottom of a casserole dish or cake pan that has a lid.
8. Gently spread the blueberries n’ cream mixture over the crumbs.
9. Sprinkle the remaining 3/4 – 1 cup of graham cracker crumbs over the top. Place the lid on or cover tightly with foil and freeze for 12-24 hours. Serve immediately upon removing from freezer.
There you have it. It’s simple, easy and so deeelicious! I hope you’ll love this as much as we do!

Printable Version {Click Here}
Ingredients:
2 large egg whites
⅔ cup granulated sugar
2 teaspoons lemon juice (bottled or fresh)
10 ounces frozen blueberries, slightly thawed – see notes below
————————————————
1 cup whipping cream
1 ½ – 2 cups of graham cracker crumbs, divided
Directions:
In a gallon size zip top bag place 1 ½ sleeves of graham crackers and zip closed.  Roll with a rolling pin until the crackers are crushed as evenly as possible.  Pour all but ¾-1 cup onto the bottom of a 9×13 cake pan (with lid) or a glass casserole dish and spread evenly.  Reserve the ¾-1 cup for the top of the pie.
Get the blueberries out of freezer and set on the counter for about 5 minutes, when they have softened enough so that you could pinch one and it would crush under the pressure of your fingers then it’s just right.  It will still be partially frozen.
Attach whips to a large stand mixer (such as a BOSCH) and place egg whites, sugar, lemon juice, and slightly thawed blueberries into the bowl, make sure your mixer lid is on.  It is important to mix these ingredients together and NOT separately! Mix on high speed for 5-10 minutes until the mixture is stiff, fat and full. It will fill up your entire bowl after it has mixed this long.  Carefully scrape this mixture into an extra large mixing bowl. In the same mixer whip whipping cream until peaks form (about 2-3 minutes).  Scrape whipped cream into the large mixing bowl with the strawberry mixture.  Gently fold the whipping cream into the blueberry mixture until it is mixed well.  Do not over mix or you will lose some of the air and fluff of the mixture.  If there are small streaks of white cream it’s just fine! I really like it that way.
Pile this mixture high on the graham cracker crumb crust taking care not to handle it too much (save the fluff).  Top with remaining graham cracker crumbs and cover with lid or plastic  wrap and freeze for 12-24 hours before serving.  You want it nice and firm before serving, and it thaws quick! Serve immediately after removing from freezer.
Recipe Source:
adapted from this recipe from my mother-in-law, Maureen Grover.
And try not to lick your plate, I dare you! 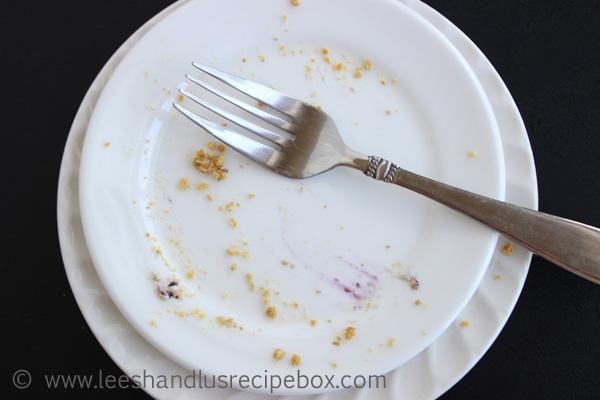 Thanks so much for sharing this deliciousness with us today, Lindsay!  I cannot wait to make it!  If you’re not already following Leesh and Lu, be sure to get on that today! 🙂  Their recipes are all SO tasty!