If you’re a Cracker Barrel fan like me, you’re sure to love this oh-so addicting copycat Coca-Cola Cake!  It’s absolutely phenomenal!  A melty, chocolate-saturated frosting atop a rich chocolate cake, both infused with Coca-Cola, then topped with a scoop of vanilla ice cream!  It’s heaven on a plate! 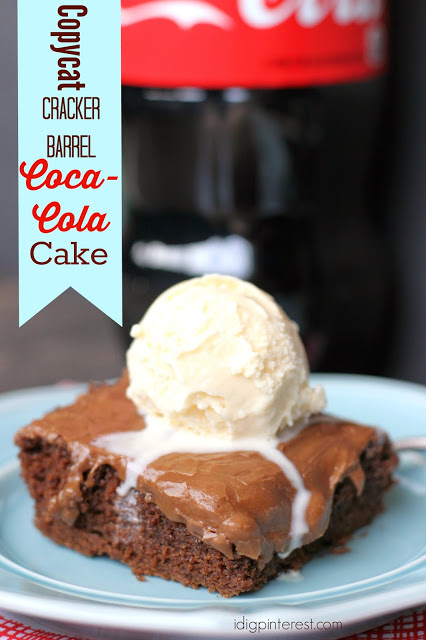 The hubby and I don’t get to eat at Cracker Barrel often,  but when we do, we ALWAYS have to order the Coca-Cola Cake for dessert.  I like to call it “Crack Cake”.  I was hooked at bite one, and basically all I could think about since was how I could go about making it for myself.
So I set out on a mission to create my own delicious version, and I’m pleased to present to you today, the winning recipe!  And winner it is!
It tastes just like the real deal, and that’s an incredibly good thing.  🙂  It resembles a Texas Sheet Cake, but the difference is the Coca-Cola add-in, in both the cake batter and the frosting, which adds a wonderful flavor!
———
{COPYCAT CRACKER BARREL COCA-COLA CAKE}
Adapted from Just a Pinch and Food.com
2 c. flour
2 c. sugar
1 c. Coca-Cola (not diet)
1 tsp. baking soda
6 Tbsp. baking cocoa
1/2 tsp. salt
2 eggs
1 tsp. vanilla
1/2 c. buttermilk
1 c. butter
Frosting:
1/2 c. butter
3 Tbsp. baking cocoa
6 Tbsp. Coca-Cola (not diet)
1 tsp. vanilla
4 c. powdered sugar
For the cake, in the bowl of an electric mixer, mix sugar, flour, salt, and baking soda.  Heat butter (I sliced mine for easier melting), baking cocoa, and Coca-Cola in a small saucepan over stovetop to boiling while whisking.  Remove from heat immediately after it boils and pour onto flour mixture.  Mix.  Add buttermilk and vanilla and start the mixer on low while adding eggs, one at a time, until mixed.
Pour into a greased 9″x13″ cake pan and bake at 350 degrees Fahrenheit for approximately 30 minutes, or just until a toothpick inserted into the center comes out clean.  About 5 minutes before the cake is done baking, begin making the frosting.
For frosting, put powdered sugar in the bowl of an electric mixer.  In a saucepan, combine butter (slice for quicker melting), baking cocoa and Coca-Cola.  Whisk while allowing it to come to a boil.  Immediately remove from heat and stir in vanilla.  Pour over powdered sugar and mix well.  You can even add in chopped walnuts or pecans at this point.  Immediately frost the warm cake, because the frosting sets up quickly.  Serve the cake warm with a scoop of vanilla ice cream on each piece.  We warmed our pieces of cake in the microwave for about 12 seconds and then added the ice cream, because we couldn’t serve it immediately.

We had dinner guests and made sure to tell them, before starting the main course, that there was a delicious dessert waiting for them.  They saved room, but even if they hadn’t, there would always be more space in the belly for this delicious treat!  I would seriously eat it for breakfast, lunch, and dinner if it were socially acceptable, and if my kids weren’t watching.  🙂
I had to wrap up the few remaining pieces and send them with the hubby to his “man game night”, or I know I would have finished them off before the dawn of the next day.  I’ve learned not to trust myself around these sorts of things.  🙂 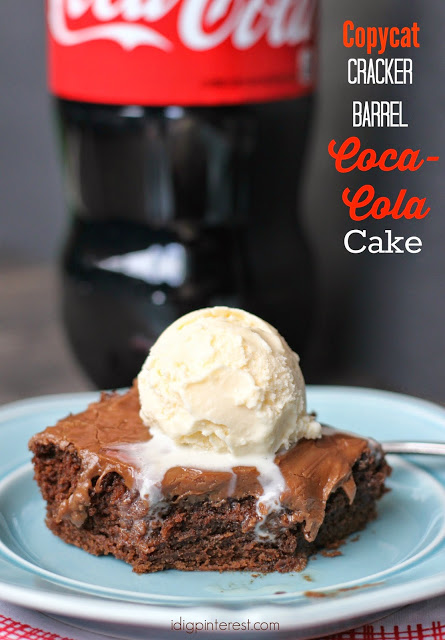 If served at room temperature, it’s nice and dense, and when warm, its texture lightens up by a lot.  Either way you prefer it, it’s sinfully delightful!Now I don’t have to dream about and yearn for this cake any more, because I can partake any time I want!  That is, as long as I’m up for some baking, which is no problem, if Coca-Cola Cake is the outcome.
Enjoy!
I’m off to bake up another pan, because I want, no I need, to re-live the deliciousness contained in these photos!