I was provided with free product from Raw Spice Bar to facilitate this review, but all opinions are 100% my own.
I’ve jumped fully on the no-churn ice cream bandwagon with this Apple Crisp Ice Cream!  It’s phenomenal, flavorful, creamy, cool and now one of my most favorite desserts! 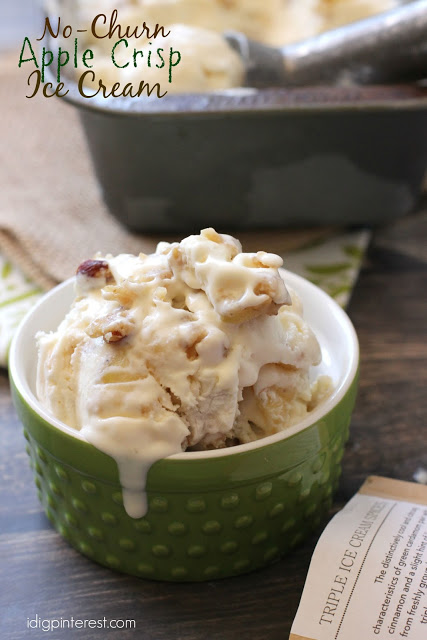 You all know how I love my food to be super flavorful, including my confections!  So when Raw Spice Bar reached out to me, I was immediately intrigued and eager to give them a try!

Their business plan is pure genius!  They ship three unique spice blends in cute little brown packets straight to your mail box each month, along with yummy recipe ideas for ways to use them!  It’s like Christmas, but once a month!  🙂
Now, these are not your run-of-the-mill spices that you might find on your grocery store shelves.  They’re from all around the world!
The subscription is fairly reasonable at $6 a month, especially considering these are spices that are freshly ground and blended just before shipping.  And, they’re something you won’t find anywhere else.
I opened the Triple Ice Cream Spices first, because my sweet tooth was calling, and the wonderful aroma immediately filled the kitchen! I left it sitting open on my counter until I was ready to use it, just because I couldn’t get enough of the fantastic smell! 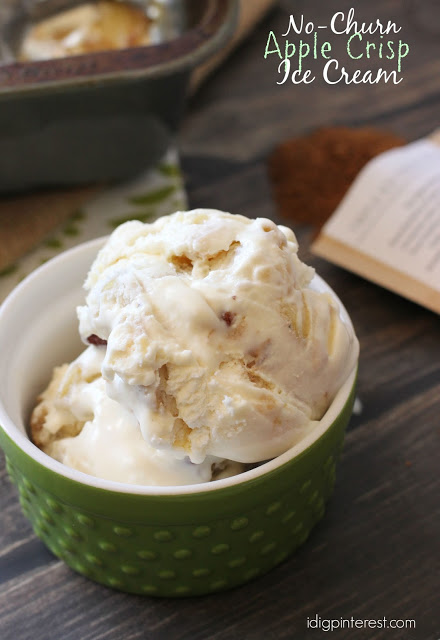 The Triple Spice Ice Cream recipe that was included in my package got the wheels in my brain turning, so I decided to put my own spin on it and make a No-Churn Apple Crisp Ice Cream!
I always like to serve my Apple Crisp with ice cream anyway, so I thought, why not combine the two?  The results were AMAZING!
I loved the surprise pop of goodness the spices gave to my apples and crumb topping. 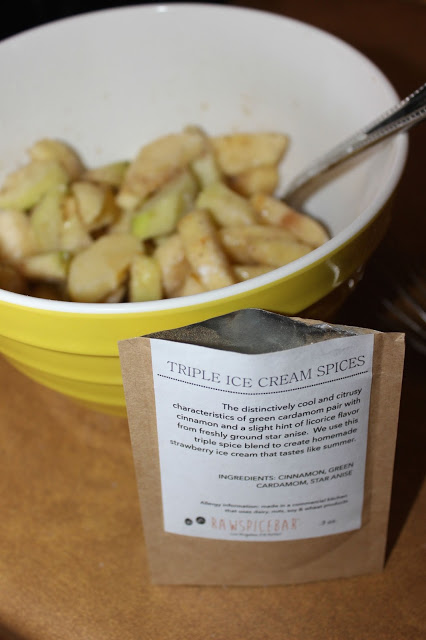 The Triple Ice Cream Spices were a perfect blend of cinnamon, green cardamom, and star anise.  I had never heard of star anise, so I did some quick research and learned that it comes from a native evergreen tree in China.  It has a licorice-like flavor and has lots of health benefits too!  How cool!

Have you tried no-churn ice cream yet?  If not, you need to!  The texture is almost the same as that of the one you’d make with an ice cream maker, but you can whip it up in minutes without the machine!  I let mine freeze overnight and it was plenty solid by the time I scooped into it the next day.
{NO-CHURN APPLE CRISP ICE CREAM}
Apple Crisp:
2 c. thinly sliced apples, peeled (I used a combo of Granny Smith and Gala)
1 Tbsp. lemon juice
2 Tbsp. sugar
1 Tbsp. flour
Pinch of salt
1/2 tsp. Triple Ice Cream Spices
Topping:
2 Tbsp. flour
4 Tbsp. butter
2 Tbsp. brown sugar
Pinch of salt
4 Tbsp. oats
1/4 tsp. Triple Ice Cream Spices
Ice Cream:
2 c. cold heavy cream
1 tsp. vanilla
1 can (14 oz.) sweetened condensed milk
2 heaping spoonfuls of powdered sugar
For the apple crisp, sprinkle sliced apples with lemon juice, toss, then add sugar, flour, salt and Triple Ice Cream Spices and toss all together. Place apple mixture in a small oven-safe dish (I used a pie plate).
For the topping, stir together flour, brown sugar, salt, oats and Triple Ice Cream Spices in a small bowl.  In a separate bowl, melt butter.  Pour butter over dry ingredients and stir. Sprinkle topping over apples and bake at 350 degrees Fahrenheit for approximately 40 minutes, or until apples are soft and topping is slightly crunchy.  Allow to cool completely.
For ice cream, in the bowl of an electric mixer, add vanilla and powdered sugar to cream and whip until stiff peaks form.  I like to put my mixing bowl in the fridge for a little bit before I need it and it helps the cream to whip faster.  Fold whipped cream into sweetened condensed milk, then reserve 1/2 cup of apple crisp and fold the rest of it into the ice cream mixture.  Pour into a bread pan, sprinkle with leftover 1/2 cup of apple crisp mixture, cover with foil and freeze overnight.
——
Now, while I totally recommend using Raw Spice Bar spices to create this recipe, if you don’t have them on-hand, you can surely use similar amounts (to taste) of the cinnamon and nutmeg flavors that are in the more traditional apple crisp. 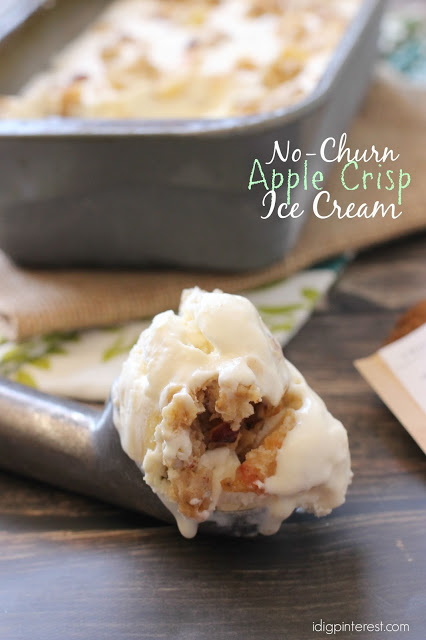 As a cook and baker who loves flavoring my food to perfection and breaking away from tradition, I love everything about Raw Spice Bar.  It’s a simple yet brilliant idea that will take your meals to the next level of awesomeness and deliciousness.  It certainly did that for my dessert, and I can’t wait to try the other two blends!

Guess what?!? Raw Spice Bar is giving all I Dig Pinterest readers one extra month free with a purchase of six months or more!  Use code “summerspices” at checkout.  Enjoy!